The Meteors with Special Guest Giddy Up Go 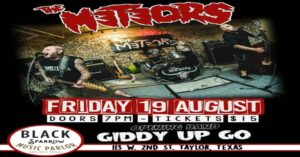 The Meteors are an English psychobilly band formed in 1980. Originally from London, England, they are often credited with giving the psychobilly subgenre — which fuses punk rock with rockabilly — its distinctive sound and style.
About.com calls the Meteors “the first true psychobilly band,” noting their blend of the “themes of horror, punk, and rockabilly”. They were the second band to use the term ‘Psychobilly’ as a description of their music. Formed in South London in 1980, they are considered the first verifiable psychobilly band.
Manage Cookie Consent
To provide the best experiences, we use technologies like cookies to store and/or access device information. Consenting to these technologies will allow us to process data such as browsing behavior or unique IDs on this site. Not consenting or withdrawing consent, may adversely affect certain features and functions.
Manage options Manage services Manage vendors Read more about these purposes
View preferences
{title} {title} {title}