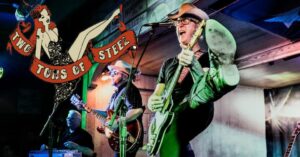 Before there was Americana, before there was Texas Country, Two Tons of Steel front man Kevin Geil and his original band, “Dead Crickets,” rocked a sound that blended the best of musical worlds and pushed the envelope of “Texas” sound with a signature brand of country meets punk.
The San Antonio-based group packed the small bars and local hangouts and quickly became the Alamo City’s most-loved band, earning them a spot on the cover of Billboard Magazine in 1996. It was the beginning of a twenty-year journey for Geil and the 4-piece ensemble. Dead Crickets, renamed Two Tons of Steel in 1996 began traveling outside of Texas.
Two Tons of Steel’s reach extends beyond their live gigs. In 2003, the band was filmed during a “Two Ton Tuesday” gig for the IMAX film, “Texas: The Big Picture,” which can be seen daily at the IMAX Theatre in the Bob Bullock Texas State History Museum in Austin and has been seen as far away as Japan. The band also has been featured as supporting characters in award-winning author Karen Kendall’s romance novel, “First Date.”
Manage Cookie Consent
To provide the best experiences, we use technologies like cookies to store and/or access device information. Consenting to these technologies will allow us to process data such as browsing behavior or unique IDs on this site. Not consenting or withdrawing consent, may adversely affect certain features and functions.
Manage options Manage services Manage vendors Read more about these purposes
View preferences
{title} {title} {title}